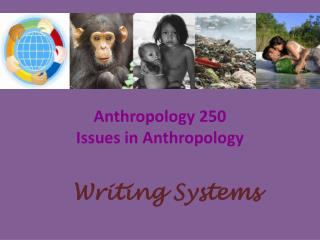 Anthropology 250 Issues in Anthropology. Writing Systems. The Beginning of History. When: Writing began about 3,400 years ago. Where: The earliest evidence for writing has been found in Mesopotamia, located in what is now Iraq. Who: The Sumerians

Chapter 1 and 2 - . themes of geography. study of the earth. cartographer meteorologist seismologist archaeologist

Anthropology - . chapters 1 &amp; 2. what is anthropology?. from the greek anthropos = man logos = study