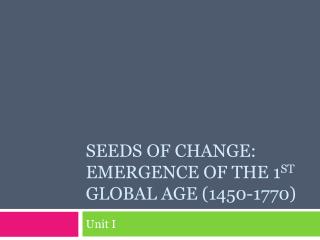 Seeds Grow! - . continue to next slide to learn about seeds!. there are many kinds of seeds!. cucumber (vegetable). acorn

Seeds - . parable of the sower. it’s in the seed. seeds travel. some fell along the path- birds ate it up some fell on

The Renaissance 1450 – 1700 - . a time period of great change in european society video introduction. what does ‘

SEEDS - . listen to the video of seed germination. we get different kinds of seeds from plants. cucumber (vegetable).

The Road to Revolution: (1770-1776) - . was the american revolution inevitable??. tar and feathering tax collectors. the

Seed Dispersal - . how do plants spread their seeds?. seeds spread by the wind. small seeds “parachute” or