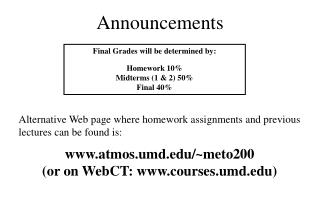 Announcements. Final Grades will be determined by: Homework 10% Midterms (1 & 2) 50% Final 40%. Alternative Web page where homework assignments and previous lectures can be found is:. www.atmos.umd.edu/~meto200 (or on WebCT: www.courses.umd.edu). Outline for Lecture 4. Introductory Talks/ Announcements - . national judge’s conference 2014. when making announcements. have notes, even if

2013 Daily Announcements - . * additional information and longer announcements are on the main page of the shs website.

VBC Public Announcements - . posting policies and procedures. announcements are a mass mailing, your name can not be

Announcements - . mission trip to mexico!!! july 14-19 th we are going to juarez and also further in country let us know

Week Two Agenda - . announcements link of the week use of virtual machine review week one lab assignment this