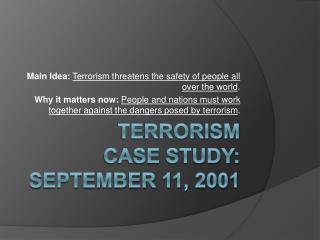 Main Idea: Terrorism threatens the safety of people all over the world . Why it matters now: People and nations must work together against the dangers posed by terrorism . Terrorism Case Study: September 11, 2001. What is terrorism?. Terrorism is not new. Understanding Terrorism in the UK - . dr. douglas weeks handa centre for the study of terrorism and political violence

Terrorism - . by t aylor petty. what is a terrorist?. definition- a person who uses terrorism in the pursuit of political

The Perception of Terrorism in Pakistan and the Advantages of a Local Solution - . the london market today. post

Philosophy 220 - . the moral status of terrorism. some definitions: terrorism. coming up with a useful, non-controversial

Case Study of a Turnaround - . anthony macari clinical assistant professor of finance and owner of explainfinance.net

What is Terrorism? - . terrorism. what is it? where does it come from? why is it used? how can we prevent it? what do we

Maximizing Peer-to-Peer Portals Through XML: An Integration Case Study from the EPA - . presentation for enterprise web