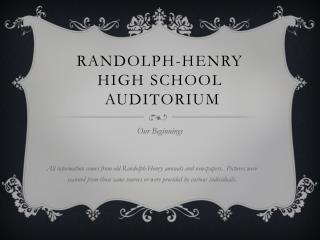 Randolph-Henry High School Auditorium. Our Beginnings. All information comes from old Randolph-Henry annuals and newspapers. Pictures were scanned from those same sources or were provided by various individuals. Planning Begins. Ice Cream at Randolph Henry - . michelle, keyana, and roger. ice cream. we did this study because they’re only a few

Henry W. Grady High School - . “individually we are different… together we are grady”. excellence and achievement.