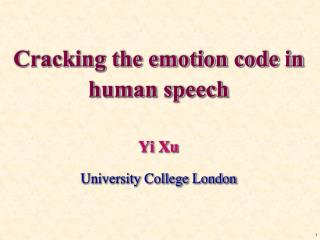 Processing the Prosody of Oral Presentations - . rebecca hincks. kth, the royal institute of technology department of

CRACK THE CODE - . by nick bentley. all about codes. codes, codes, codes. there are a lot of different types of codes.

Basic Principles of Cracking the AP Lit Test Code - . rapert/ap lit. have a plan to use time well and guess wisely and

Cracking the “Canadian Experience”Code - . shannon jackson, manpower services. agenda. thank you what does

The Good, the Bad and the Muffled: the Impact of Different Degradations on Internet Speech - . anna watson and m. angela