STRESS IS A PERSON’S PHYSICAL AND EMOTIONAL RESPONSE TO CHANGE. - PowerPoint PPT Presentation 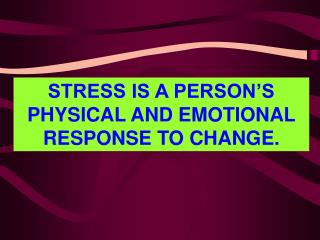 STRESS IS A PERSON’S PHYSICAL AND EMOTIONAL RESPONSE TO CHANGE.

1 / 105
STRESS IS A PERSON’S PHYSICAL AND EMOTIONAL RESPONSE TO CHANGE.
316 Views
Download Presentation STRESS IS A PERSON’S PHYSICAL AND EMOTIONAL RESPONSE TO CHANGE.

What Is A Person?

WHAT IS A PHYSICAL CHANGE? - . december 20, 2012. what do you think a physical change is?. any change to the physical

Response to Stress - . spring 2013. how you respond to stress. depends on how you assess a situation is this situation a

Popular Film and Emotional Response - . consider the following: how does film manipulate the spectator? the difference

A proposed response to climate change

Who Is A Person? - . jessica troccolo, tim egginson, robert kelly. racism. racism interferes with how we define someone

Popular Cinema and Emotional Response - . tanya jones. spectatorship. within the study of spectatorship : the

Film and Emotional Response - . what is ‘emotional response’?. what is emotion?. a feeling? too vague are emotions

What is a person? When is a person? - . the abortion cases. two types of laws. constitutive tempting analogy to chess

Stress and Emotional Health - . what is stress?. stress is a normal physical response to events that make you feel

What Is a Person? - . &quot;human beings are animals.  we are sometimes monsters, sometimes magnificent, but always

HUMAN GROWTH AND DEVELOPMENT “ To be a person is to change. Change is what development is all about. There is nothing

One Person s Junk is Another Person s Treasure

STRESS AND PHYSICAL HEALTH - . psychosomatic medicine is an area of scientific investigation concerned with the relation