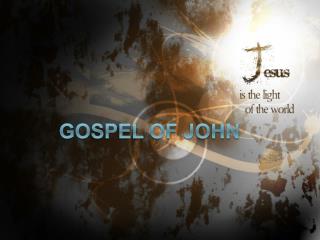 Personal Finance: a Gospel Perspective - . the auto decision. objectives. understand how a car fits into your financial

The God Head – So You Want Proof? - . the gospel of john by pastor james groce edited into powerpoint by martyn

Who is this Jesus? And what is His “Gospel” message? - . bumble@tnsa.net. review. is there a creator god (without an

Personal Testimony - . juli anna vonderharr. living in the light of the gospel. big idea  if we are going to live for

The Word Is Alive The Gospel of Matthew - . chapter nine narrated by tony gillon. chapter nine. matthew 8:1–9:38 - the

The Ingredients of a Gospel Meeting - . acts 2. why would the coca-cola company go to great lengths to protect their

The First Epistle of John - . walking in the light. the gospel and the epistle. gospel of john. 1 st epistle of john.