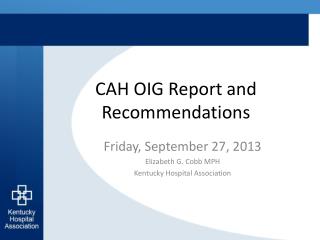 A Comparison of the EU-15 Countries Based on the Stiglitz Report’s Recommendations - . g. madonia department of

REVIEW OF SE 19 RECOMMENDATIONS FOR COEXISTENCE IN 24 - 29 GHz - 2 - . agenda: problems with technical report and

Research School of Humanities and the Arts Implementation Plan Final Report and Recommendations - . college of arts and

REPORT AND RECOMMENDATIONS OF THE PANEL TO ASSESS THE NIH - Investment in research on gene therapy stuart h. orkin, m.d.

The Final Report: - . delivered to aitac, citsc, and smt (on jan. 21) smt accepted all recommendations, however… “it

STANDING SCIENTIFIC GROUP ON GEOSCIENCES REPORT TO DELEGATES OCTOBER 2004 - . presentation. brief reports on the work of