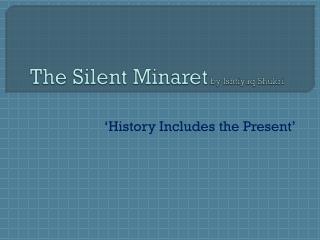 The Silent Minaret by Ishtiyaq Shukri The Silent Minaret by Ishtiyaq Shukri

‘ silent k ’ - . year two week 9 focus. the rule silent k. you do not say the sound of the silent letter the silent k

The Silent Minaret by Ishtiyaq Shukri THEMES: - . in an interview, ishtyiaq shukri explains that his novel the silent

THE NETHERLANDS AFTER 1945: TWO SILENT REVOLUTIONS AND ONE VIOLENT ONE? - Eighth meeting of the phd course paradigms and

SILENT ACCOUNT - . an account in which no transaction has taken place for three consecutive financial years since last

The Silent Generation - . (born between 1925 and 1945). the silent generation: a voice from the generation speaks

Silent Film - . silent film was never truly silent. you always had a piano player or an orchestra, plus a lecturer. where

Sustained Silent Reading - . 15 minutes of silent reading. stay seated if you do not have a book, you may use one of mine

Silent Movies - . (shhhhhh! they’re silent.). a silent film is…. a film with no accompanying, synchronized recorded

Islamic Art - . use online text page 277 to help answer the questions. . architecture arches. question 1. what is an