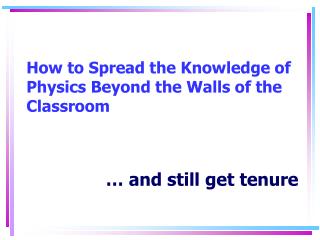 How to Spread the Knowledge of Physics Beyond the Walls of the Classroom. … and still get tenure. Scientists in the K-12 Classroom: Can We Make a Difference?. Diandra Leslie-Pelecky Department of Physics & Astronomy Center for Materials Research & Analysis University of Nebraska. Beyond the Classroom Walls - . providing leadership opportunities to your biomedical science students. what, why, where,

Beyond the Walls - . extending learning beyond the walls of a classroom. we can teach from our experience, but we

Beyond the Walls - . extending learning beyond the walls of a classroom. we can teach from our experience, but we can’t

Beyond the Walls - . welcome. beyond the walls. o for a thousand tongues to sing my great redeemer’s praise, my great

Beyond the Walls: OUTREACH - . by maria gentle and mariela aguilar april 2009. outreach: what is it?. effort by

Expanding the Classroom Walls - . distance learning and virtual field trips. what are we talking about?. sites, sites,

beyond the classroom - . youth learning with youtube. the new media environment has changed the process of learning and

Beyond the Classroom - . andres tack gabriel burt brandt dusthimer parisa tabriz. who am i?. second-year student in

Brahmagupta The Increasing and Spread of knowledge - . daniel defelippis period 3. life. born in 598 ce possibly in

The child beyond the classroom - . do you have children who stand out from the crowd?. anxious?. disruptive?. are

The Spread of the Renaissance - . “it’s still all about geography!” claire spencer, granger high school, west

The Spread of the Church - . the day of pentecost. while the apostles and disciples are meeting the holy spirit descends

The Spread of the Reformation - . spread of luther’s ideas. prior to luther, many people who were frustrated with the

Unit 3 The Spread of English Beyond Britain - . targets: give examples of national and international languages explain

The Communication of LIFE’s results: how to spread the world? - . simona bacchereti life programme communications team.