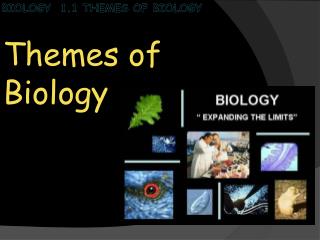 Introduction to biology - . biology. bios-: greek for life -logy: study of a biologist uses the scientific method to

Introduction: Unifying Themes of Biology - . chapter 1. inquiring about the natural world. biology is the scientific

BIOLOGY - . lt: i can read and understand a textbook passage. br: what are your new years resolutions?. biology.

Biology and You-Chapter 1 - . i. themes of biology. a. living organisms have certain characteristics in common. 1.

BSC 103: BIOLOGY AND SOCIETY - Frank moore objectives logistics biology and society objectives biology is all around us!