Welcome to the - PowerPoint PPT Presentation 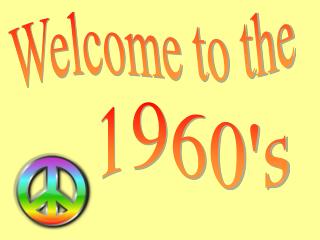 Welcome to the. 1960's. What was it like living in the 1960's? Your job is to gain knowledge of the early 1960's culture in order to better understand and connect with the characters in The Outsiders . You will explore such topics as music, cars, clothing, entertainment, and more!.