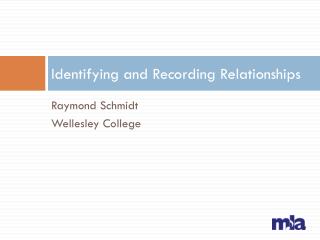 Developing Relationships with Private Foundations and Trusts - . strategies for cultivating, soliciting and stewarding

Identifying - . john v. balanquit. objectives. student will be able to : discuss the concept of identifying summarize the

Relationships - . relational database. in the previous tutorial you learnt about identifying entities in a flat file

3.07 Understand the nature of customer relationship management to show its contributions to a company - . performance