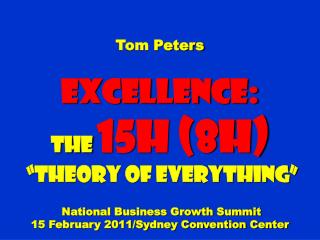 Tom Peters Excellence: The 15H (8H) “Theory of Everything” National Business Growth Summit 15 February 2011/Sydney Convention Center. “Business has to give people enriching, rewarding lives … or it's simply not worth doing.” —Richard Branson. The Moral Basis For Excellence: The 12H “Theory of Everything” BNZ /A CONVERSATION WITH TOM PETERS - Note : to appreciate this