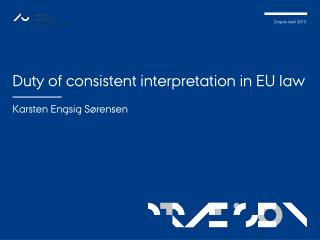 Interpretation The Use of Rate Law

Sources of Law Statutory Interpretation - . what are the two most important sources of english law?. eu law acts of

EU Environmental Law - . group 3: is a focus on courts in environmental law just an obsession with legal centralism?

CCMA ARBITRATION GUIDELINES: INTERPRETATION OF THE LAW - . origins of the guidelines . issued in terms of section

Basic EU Law - . prof.dr.sc. hana horak. structure of the lecture. why eu law? summary of the european integration the

Decade of the EU law in Latvia - . the two most important compentences of the court of justice of the eu as a point of