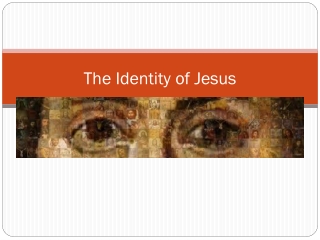 The Identity of Jesus. What you have covered in this unit…. The titles of Jesus (Son of God, Christ, Messiah, Son of Man, Son of David and Saviour). STORIES The Ministry of John the Baptist. Peter’s declaration about Jesus. The Transfiguration. Jesus’ entry into Jerusalem. Why we are here - . and i care because. identity theift cyberstalking these dangers are real!. identity thief. what is

Part 1: “Establishing the Identity of Jesus” - . let the defendant take the

The Identity of Jesus - According to the bible, the son of god was flogged, ordered to carry the cross on which he would

Helping Others Succeed at Fundraising - . this much i know is true. marc a. pitman, fundraisingcoach.com. twitter:

John 11 Jesus is Life - . the journey to lazarus. john 11, p.820 the family courage and context questions and pain

Peter: Identity crisis Daniel: Identity confirmed Jesus: Identity complete - I have been crucified with christ; and it is

Body Life The True Identity of the Local Church - . colossians 2:6. therefore, as you have received christ jesus the

Self and Identity - . self: the total array of meanings and feelings that one associates with my “entire being.”

IDENTITY - . what is identity?. what does identity mean to you ? what might a work of art look like that deals with

The Identity, Initiatives , &amp; Insights of Jesus - . last week: what to take/ask from life: 1. the holy spirit