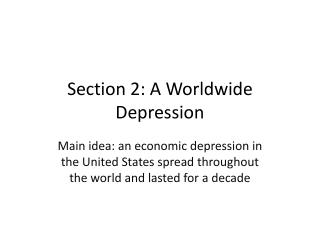 Section 2: A Worldwide Depression. Main idea: an economic depression in the United States spread throughout the world and lasted for a decade. Setting the Stage. Only the United States and Japan came out of World War I in better financial shape than before A Worldwide Depression - . bell-work 3/7. at the top of your cornell notes “notes” box, predict what you think the

A WORLDWIDE DEPRESSION - . 1. in new postwar democracies, there were frequent changes in gov’t. little experience w/

A Worldwide Depression (Ch. 15, Sec.2) - . problems in postwar europe. most major european countries were bankrupt after

Worldwide Depression Mini Q - . question: how did the world-wide depression impact europe in the years between wwi and

The Worldwide Great Depression - . from boom to bust. conditions after world war i. economic problems in europe severe

Paper 2 Section A - . don’t forget to bring your anthology for this exam. poetry from different cultures. 45 minutes 1

PAPER 2 SECTION A - . zulaili bt yaacob. question 4. which chapter ?. which principle or law. how many mark /s. explain :

Great Depression #2 - . question 1 - 10. this depression era legislation set up a payroll tax that would allow

Treaty of Versailles and the Worldwide Depression - . unit 2 notes. in november 1918 germany surrenders to the allied