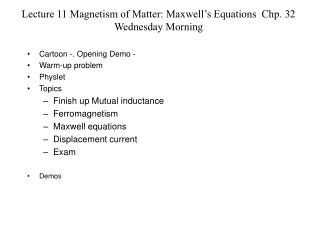 Magnetism - . top ten list. what we will learn about magnetism. 1. there are north poles and south poles. 2. like poles

Lecture 30 - . quiz on wednesday: fatty acid synthesis (you will have 15 min to take the quiz; we will still have a

Personnel Selection - . u1: the legal context. schedule: wednesday and monday: lecture wednesday, 1/14: exam. so5: why

Format of the Lecture - . four programming problems; we will solve two problems in the morning and two in the afternoon;