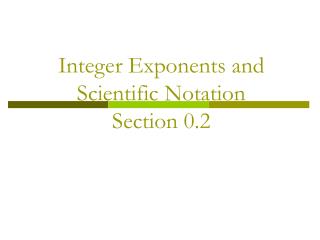 Integer Exponents and Scientific Notation Section 0.2. What’s an exponent?. Exponents are shorthand notation for repeated multiplication: 5 555 = 5 4 There are four 5’s being multiplied together. In 5 4 , the 5 is called the base and the 4 is the power or exponent.

CSE313 Computer Architecture - . arithmetic for computers. outline for the lectures. some arithmetic fundamentals

Integer Multipliers - . multipliers. a must have circuit in most dsp applications a variety of multipliers exists that

Intermediate Algebra 098A - . review of exponents &amp; factoring. 1.1 – integer exponents. for any real number b

Chapter 3 STRUCTURE AND PROPERTIES OF MOLECULES - . the molecule is a set of atoms that are in strong chemical connection