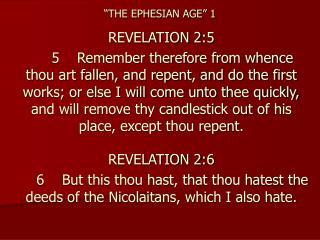 “THE EPHESIAN AGE” 1. REVELATION 2:5 5 Remember therefore from whence thou art fallen, and repent, and do the first works; or else I will come unto thee quickly, and will remove thy candlestick out of his place, except thou repent. REVELATION 2:6

Paul’s Blameless Ministry - . introduction. paul’s farewell to the ephesian elders reveals the characteristics of a

If you were an Ephesian (and you are) Part 2 - . last week in review. if you want to strengthen how well you love,

HISTORY OF GOD’S ORIGINAL CHURCH - . what does church history have to do with xmas? it shows us it was one of the pagan