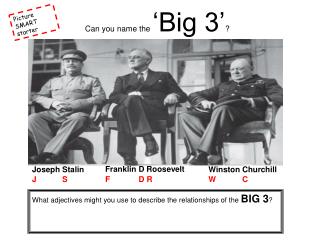 Picture SMART starter - . either individually on a5 pieces of paper or collaboratively as a group draw what you think a

Picture SMART starter - Write numbers 1- 15in the back of your book. picture smart starter. q5. q8. what dates were the

Starter- Picture in time - . what might have happened before the photo was taken? why did these demonstrations take

Number SMART starter - . number the following in order of importance as to why the cold war began. 1 most important. 7

Picture starter: Why is this happening? - . these men have been sentenced to death in iran what do you think their crime

Starter: What can you see in this picture? - . key terms: ethnocentrism, culture, status, roles. lo: can i explain the

Starter Activity: On a show me board describe this picture: - . biodiversity. learning intention: identify, describe and

Starter - Learning objective: to begin to understand how the technical aspects make audience meaning, focusing on: -

Starter - . use your polyatomic sheet/flash cards to write the chemical formula of each polyatomic below: phosphate

Starter - . identify the 4 main causes of world war i. what was the “trigger” that began world war i? list at least 3

Starter - . 1) write the balanced equation for the reaction of 2-bromopropane with aqueous hydroxide ions 2) what would

Starter: - . think of the word “democracy.” what are the first images or words that pop into you head upon hearing

Starter - . describe religion in the colonies. objective 1.05. identify the major problems of the nation under the

Starter : - . fantastiqu e goïst e timid e. use your vocab sheets and resources in your book to continue this

Starter - . 3/25: mine friend is likeing to work with childs’ small. now she studies education in an university of