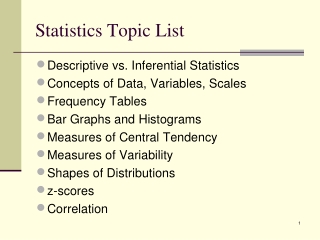 AP Statistics - . topic 3 summary of bivariate data. overview of this topic. in topic 2 we studied the analysis of

The Literary Analysis: - . john steinbeck’s of mice and men. step 1 (topic selection):. choose your topic from the list

Topic 3: Understanding Organization Development - . jica lgrep. topic objectives. at the end of the session the

TOPIC 1.2 - . introduction to networking. objectives. by the end of the topic, students should be able to: list the

Essential Statistics - . ( a.k.a : the statistical bare minimum i should take along from stat 101). essentials: the

Choosing a Topic - . ideas? dewey decimal system. how to narrow a topic. make a list of information that you already know