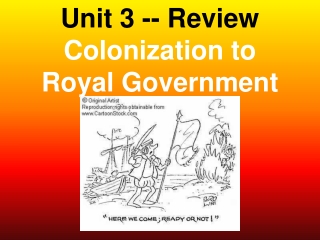 Unit 3 -- Review Colonization to Royal Government. EXPLORATION. Why did Hernando de Soto explore much of Georgia in 1540?. Rumors of large gold deposits . Why was de Soto’s expedition considered a failure?. De Soto did not find any gold or riches. U.S. Government - . need for government. needed a government because the states had been royal colonies with royal

Course Review: The Federal System and the YCJA - . social studies 9. unit 1: outline. unit 1 focuses on the structure of

Extra Review Unit 3 - . government. question 1 . which of the following best describes federalism ? a. when the central

Government Unit 1 : Review - . government warm-up. recall and list some of the weaknesses of the articles of

Unit 3 Quick Review - . 1. 1 st document of self government in the english colonies. mayflower compact. 2. what was the