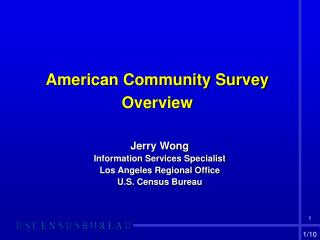 The Survey Cycle - . sampling overview. a quote …. “why do they call it common sense? it isn’t that common.” -

Chapter 53 - . community ecology. overview: what is a community? a biological community is an assemblage of populations

Overview - Community based strategy for implementation of the firearms law in quebec: a project sponsored by the national