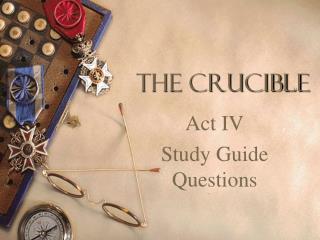 The Crucible. Act IV Study Guide Questions. 1. What explanation does Cheever give for Parris’s “mad look”?. He thinks it is caused by the cows. In other words, the cows are left wandering since their masters are in jail, and there is much contention in the town about ownership.

Themes, Motifs and Symbols - . themes. the central idea or underlying meaning of a literary work typically deals with an

The Crucible and McCarthyism - . bell work: please get out your notebook. we will be taking several notes today in class.

THE CRUCIBLE - . what you need to know about the context of this famous play. firstly, what is a crucible?. crucible: a

The Puritans and the Salem witch trials - . introduction to the crucible. who were the puritans?. the puritan movement

The Crucible - . act 2 review. in what way has mary warren changed and what changed

A Puritan Community - . to put you in the right frame of mind for the crucible, you are going to put yourself into some

McCarthyism - . what’s really behind the crucible…. allegory. arthur miller wrote the crucible as an allegory for

Realism, Arthur Miller, and - . the crucible. the play. the drama. the playwright. arthur miller. born and raised new

THE CRUCIBLE BIO POEM - . assignment. select a character from the play the crucible. draft a bio poem for that character

Puritan Laws - . intro to the crucible. what not to do…puritan style!. hunting ducks is illegal (if you’re a bad