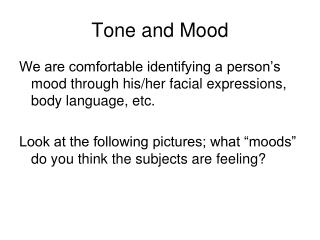 Tone and Mood. We are comfortable identifying a person’s mood through his/her facial expressions, body language, etc. Look at the following pictures; what “moods” do you think the subjects are feeling?. Now look at these next pictures… What do you think is each speaker’s tone ?. When Will I Get Better? Prognostic Factors Related to Mood Disorders - . todd finnerty, psy.d. psychcontinuinged.com opa

English and tone languages - . john goldsmith. english as a tone language. some basics about language and speech tone

TONE vs. MOOD - . tone is the writer’s attitude toward a subject. mood is the way that you feel when you are reading.

Tone Units, Stress and Intonation - . tone unit. an utterance may be spoken as a single tone unit or it may be broken

Mood Disorders - . mood. the prominent feature of any mood disorder is disturbance in mood. euthymic. dysphoric.

Mood and Tone - . tone and mood are literary elements integrated into literary works, but can also be included into any