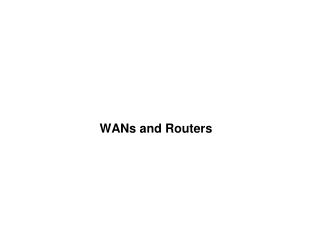 WANs and Routers. Introduction to WANs. A wide-area network (WAN) is a data communications network spanning a large geographic area such as a state, province, or country. Use transmission facilities provided by common carriers, for example, telephone companies. WANS and ROUTERS - . presented by les mclellan dean whittaker sandy workman. wans and routers. what is a wan? wan devices

Ch.1 – WANs and Routers - . ccna 2 version 3.0 rick graziani cabrillo college. note to instructors. if you have

CCNA 2 Module 1 WANs and Routers - . objectives. upon completion of this module, the student will be able to perform

CCNA 2 v3.1 Module 1 WANs and Routers - . introduction to wans. a wan is a data communications network that spans a large

Routing and Routers - . reading. computer networking illuminated chapter 8 section 8.5 will not be on test linux

Routing and Routers - . routing. what is it?. routing – street analogy. routing- what is it?. selecting of paths in a