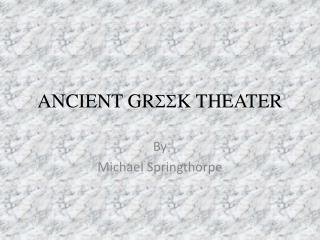 ANCIENT GR SS K THEATER. By Michael Springthorpe. History. Greek theater began in the 6 th century BC as performances of choral hymns as part of the worship of Dionysus Thespis, a man from Attica, added the character known as the “protagonist” as an actor to interact with the chorus The Greek Olympics - . greeks honored their gods by competing in sporting contests. the largest event took place every

The Early Empires of Ancient Mesopotamia: The Sumerians - . the ancient fertile crescent area. the middle east: “the