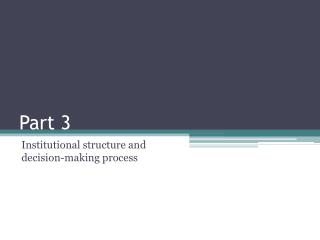 part 3: - . “god is good”. heresies: can we know god? can he know us? mormonism: you can literally become a

PART 3 - . susy. search for supersymmetry. symmetry between fermions (matter) and bosons (forces) for each particle p

PART 3 - . sql. commit &amp; rollback. insertions, deletions and updations into or from a database can be reversed