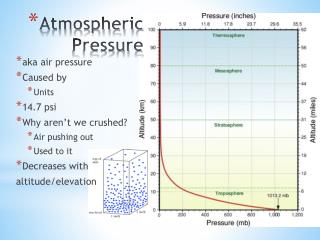 SURVEY OF CHEMISTRY LABORATORY I CHEM 1151L DETERMINATION OF ATMOSPHERIC PRESSURE - . caution!!!. be sure to wear safety

Liquid and Atmospheric Pressure - . physics february 15/16. make a prediction. if i put 3 holes in the bottle, one right

Atmospheric Circulation - . the earth’s energy is partly redistributed by atmospheric circulation. factors in the

Lecture 10 - . pressure and wind. also called “barometric pressure” we measure pressure with a barometer. the first