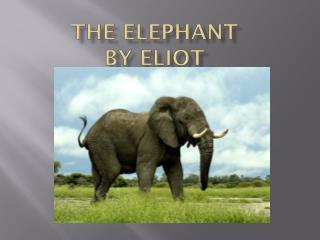 The Elephant by Eliot

The Elephant by Eliot. Table of Contents. What is an Elephant 3 Comparison 4 The Asian Elephant 5

The Elephant by Eliot

BATTLE OF HYDASPES 326 BC - . alexander the great’s last great battle. before the battle. crossing the river posed many

Poetry - . stanza. a group of lines whose metrical and rhyming pattern is repeated throughout the poem. meter :. a rhythm

Attention Lions of Multi District 23 - . 2013 lions ad book. enter your ad to be distributed at both at mid-winter and

Sound Wave Properties - . what we have learned:. sound is a longitudinal wave. (a mechanical wave caused by a vibration)

Ch.34 African Art after 1800 - . art beyond the western tradition. the majority of the work viewed in this slide show is

A Lecture Outline of Hills Like White Elephants By Ernest Hemingway - . objectives: after 6-7 class hours, students are