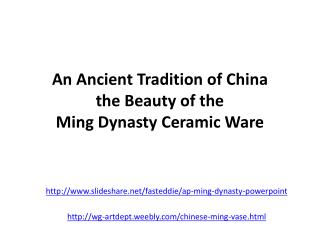 An Ancient Tradition of China the Beauty of the Ming Dynasty Ceramic Ware. http://www.slideshare.net/fasteddie/ap-ming-dynasty-powerpoint http://wg-artdept.weebly.com/chinese-ming-vase.html. A tradition of excellence.

The Resurgence of Empire in the East - . the sui dynasty (589-618 ce). regional kingdoms succeed collapse of han dynasty

Qin Dynasty China 221 BC-205 BC The First Real Empire - . zhou to qin: warring states. disorder or loose government of

The History of Ceramic Tiles - . origin of the words:. the latin word tegula and its french derivative tuile literally