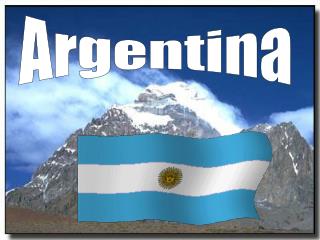 Argentina. History Of Argentina. Ancient Argentina. Those first hunting tribes coming from the continent 30,000 years ago arrived from Asia in America through the Bering Strait. Tools.

ALC 55 - . please turn in your argentina paper . there will be an assessment next time of what you know about argentina

Argentina - . by: jacob barnes. 5 facts about argentina. 1.the argentine republic is the second largest country in south

ARGENTINA - . by: isaac baldwin. about their flower. the ceibo is the national flower of argentina. it grows on the banks

Argentina - . by: jared singletary. landforms argentina has 5 major regions, such as the rain forests in the

Argentina - . a lesson in geography. homework