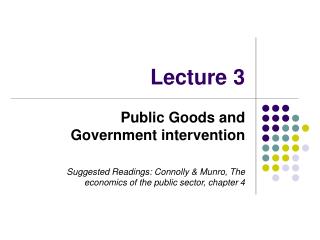 Lecture 3 - . the various contaminants to the sz effect telescopes and how they deal with the various issues: single

Lecture 3 - . what is a gene, how is it regulated, how is rna made and processed, how are proteins made and what are

Lecture 3 - . markets and welfare. what will we discuss?. what is consumer surplus? what is producer surplus? why is free

Lecture 3: - . was / were, had past tense (simple) passives comparatives, superlatives (adjectives + adverbs) as … as

Lecture 3 - . intrinsic semiconductor. when a bond breaks, an electron and a hole are produced: n 0 = p 0 (electron