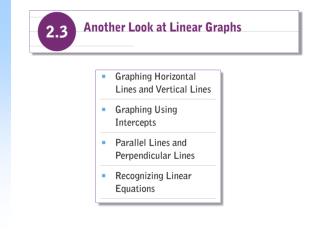 Choose any number for x. y must always be 2. Lines with Zero Slope and Undefined Slope. Example Use slope-intercept form to graph f ( x ) = 2. Solution

Slope Day 2 - . remember…. zero. negative. positive. undefined or no slope. find the slope of the following line. the

Introduction To Slope - . slope is a measure of s teepness. what is the meaning of this sign?. icy road ahead steep road

3.4 Find and Use Slopes of Lines - . define the following words: slope rise run. - the rate of change. - the change in y.

Slope - . traditional slopes:. positive slope: this is a slope that increases as you move from left to right on a

2.3 Slope - . finding slope and rate of change parallel and perpendicular lines. slope. slope is the change in y over the

Slope of a Line - . a brief tutorial on how to determine the slope of a line when given the coordinates of two points on

How to find the slope and the y-intercept OF A LINE - . kaleb points. this is what a slope intercept line looks like.

Linear Functions - . review of formulas. formula for slope. standard form. *where a&gt;0 and a, b, c are integers.

Rate of Change and Slope - . objectives: • use the rate of change to solve problems. • find the slope of a line.

The Straight Line - . + ve gradient. c. c. - ve gradient. all straight lines have an equation of the form . m = gradient.