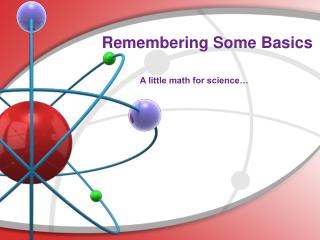 Remembering Some Basics. A little math for science…. A little “why ”… to get started….

PowerPoint Basics - . eric prebys. why?. q: do computers make our life easier?. a: i don’t know, but powerpoint does.

PowerPoint Basics - . “just what are we trying to do with this software anyway?”. objectives. state the role of

Powerpoint Basics - . sci. info skills. it is a simple program to use simply you know word so you know the basics– they

Christian Doctrine: Some basics POWERPOINT 1A - . red letter points – ppt 1a. patron saint of week: who is mary?

Christian Doctrine: Some basics POWERPOINT 1A - . red letter points – ppt 1a. explain the passage from the council of