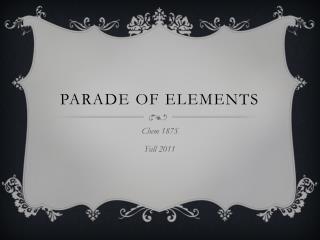 Parade of Nations - . imun 2011. introduction. the parade of nations catwalk 2011 fashion show organized as part of the

A Parade of Patriots - . label the front of your file folder with your patriot’s name, birthdate, and death date.

Shot Parade - . add your names here. directions. using a digital camera, take a photograph of each of these shots then

COW PARADE - . just what is the cow parade you ask?. an art exhibition with a •difference (because it is on life-size