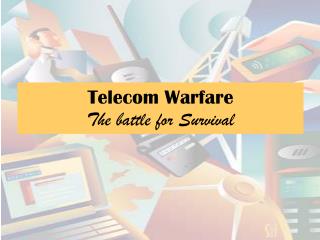 Telecom Warfare The battle for Survival Telecom Warfare The battle for Survival. The sequence of events……. The ‘per-second-billing’ revolution by Tata Docomo’s GSM service The introduction of 50p pulse flat by Rcom - a wave of lowest tariff buzz in the country enthralled every one A damage of Rs 35,000 crore to Bharti’s valuation

Telecom Warfare The battle for Survival

Culture Clash How We Win the Battle for Better Health - . dr. steven aldana ceo wellsteps. think of a food you crave.

Active Shooter and 4 th /5 th Generation Warfare - . how to minimize loss of life as crime and terrorism blend a resource

Census and Sample Surveys as a Source of Mortality Data - . session 10b (for statisticians). outline. introduction five

Battle of the Hürtgen Forest (Hurtgenwald) - . battle of hürtgen forest is name given to series of battles fought in