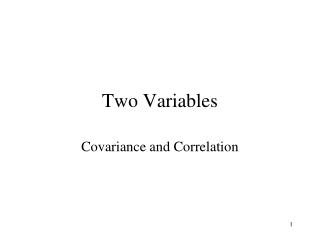 Two Variables. Covariance and Correlation. y. II I III IV. x. When you first encountered the coordinate system used for graphs, you may recall talking about the first quadrant, second quadrant and so as shown in the graph. . y. Two variables - . covariance and correlation. on this one golf hole over several days i noticed my first shot was not the

Two Quantitative Variables - . scatterplots examples how to draw them association what to look for in a

Two Random Variables - . w&amp;w, chapter 5. joint distributions. so far we have been talking about the probability

Two Random Variables - . introduction. expressing observations using more than one quantity height and weight of each

Statistics of Two Variables - Trivia. statistics of two variables. question: variables have a ______ ______ if changes in

Relations Between Two Variables - . regression and correlation. in both cases, y is a random variable beyond the control

Functions of two variables - . graphical, numerical and analytical points of view. functions of one variable. in first

Linear Inequalities in Two Variables - . interactive quiz. instruction. choose the letter that corresponds to the best