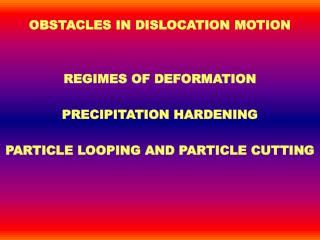 Shoulder Dislocation - . by: hashem bukhary. anatomy the most commonly dislocated joint in the body, why ? s tability is

Deformation of Rocks - . how rocks deform brittle-ductile behavior faulting and folding. stress and strain. the keys to

Deformation of Solids - . so far, we have assumed that solids always retain their original shape and cannot be deformed

Case Hardening of Steel - . metallurgy for the non-metallurgist. learning objectives. after completing this lesson,

HARDENING - . high hardness values can be obtained by the process c/a hardening. hardening consists of heating to

Deformation of Crust - . fall 2013 . how the crust is deformed . deformation- the bending, tilting, and breaking of the

Patterns of Dislocation - . maps of human relocation. rank #1 -- this region generates more than half of the world’s

Elbow Dislocation - . 3-6% of all elbow injuries peak: 13-14 yrs after closure of physes high association with the