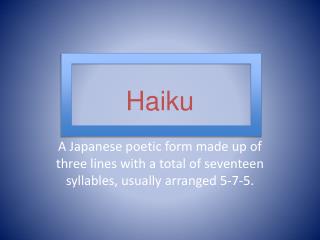 Haiku. A Japanese poetic form made up of three lines with a total of seventeen syllables, usually arranged 5-7-5. . Etheridge Knight. Eastern Guard Tower Glints in Sunset; Convicts rest Like lizards on rocks The piano man Is stingy at 3 am His songs drop like plum. Limerick. Haiku - . the night wind was strong, as snow fell on the white blanket, it was a freezing night. tee yu

Haiku - . an art of few words, many suggestions. haiku analysis. how many lines does each poem have? how many syllables

Haiku - . haiku. haiku poems are generally written to describe nature. the most widely recognized form consists of a

HAiku - . i look at the stars, i feel you're doing the same, i feel less alone. limerick. there once once was a man from

Haiku - . hundreds of years ago, the japanese created an art form - in the shape of a small verse. in haiku, we share the

Haiku - . haiku is an old form of japanese poetry haiku is written in 3 unrhymed lines the 1st and 3rd lines have 5

HAIKU - . what is haiku?. a form of poetry made popular in japan, which has become appreciated around the world. grew out

Haiku - . ~ began in japan during the 17 th century ~ about nature or everyday life ~ based on personal reflection. a

Haiku - . by riley, liam, ryan and hamish. a peasant’s child husking rice, pauses to look at the moon matsuo basho. i

Haiku - . haiku is a form of poetry that captures a moment in time in a very short, descriptive verse. -. haiku is an

Haiku - . haiku. the content of haiku poems is primarily nature, but more recent forms of haikus are about anything the