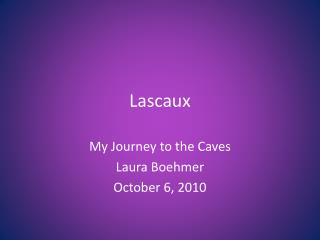 Lascaux. My Journey to the Caves Laura Boehmer October 6, 2010. The Hall of Bulls. THE LASCAUX CAVE - . by: savannah breunig hour 7. the hall of

The Lascaux cave - . sounds like lasso, but with an sc , like the sc in the word school.

Cave Paintings of Lascaux - . located in southwestern france discovered by four teenage boys in 1940 they kept it secret

From Lascaux to the Guggenheim - . a history of different media: text, sound, computing, communication technology, film.

Cave Art and Artifacts Lascaux, France - . poster #1 unicorn. animal or man? one very right eye, it may be a hunter not