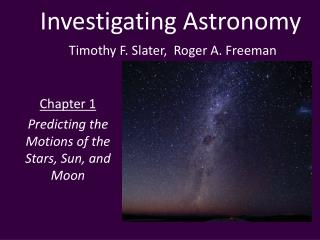 Investigating Astronomy Timothy F. Slater, Roger A. Freeman. Chapter 1 Predicting the Motions of the Stars, Sun, and Moon. The Scientific Method. Hypothesis: A testable idea Theory: A description of nature, based on a great deal of data. Slater Mill - . by john turkington. a tailor t wo c

Slater Mill - . by john turkington. a taylor in two

Investigating a Character - . i will learn to explore a character’s role in a book. i can select key words and give