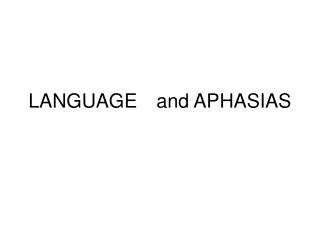 LANGUAGE and APHASIAS. ANIMAL COMMUNICATION MECHANISMS serve the purpose of identifying members of a species Innate: dance of honeybees: it uses arbitrary conventions to describe objects distant in both space and time

Aphasia - . what is aphasia? types of aphasia cognitive neuropsychology and aphasia syndrome or symptoms? computational

Aphasia - “i mpairment of central language abilities in the speech modality following brain damage .“ in contrast to:

Aphasia - . • aphasia is a language impairment due to neurological disease or damage. • broca’s aphasia presents as

Aphasia - . asrar altuwairqi. out line . what is aphasia? aphasia type what causes aphasia sing and symptoms fact about

What is Aphasia? - . - aphasia is a disorder that results from damage to the parts of the brain that contain language.

Language and the brain - . detailed review. anatomy of the brain. what is a hemisphere, and what is

What is language? - . language is basically speech, not writing most languages lack a written form but all human groups

Aphasia - . def of aphasia : a disorder of language that is neurogenic (caused by brain disease or injury), which