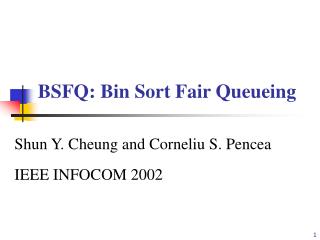 Sorting - . chapter 10. chapter objectives. to learn how to use the standard sorting functions in algorithm.h to learn

A Modern Tool for Approximative Queueing Analysis: Theory and Practice - Acm sigmetrics 2010. a modern tool for

Well, Sort-of - . what is a computer??. all computers are systems of input, processing, output, storage, and control

Well, Sort-of - . what is a computer??. all computers are systems of input, processing, output, storage, and control

INTERNATIONAL SCIENCE AND ENGINEERING FAIR and the Lake Regional Science and Engineering Fair - . 2014. rules and

1893 Chicago World’s Fair - . by: mr. farthing american history period 4. what was the world’s