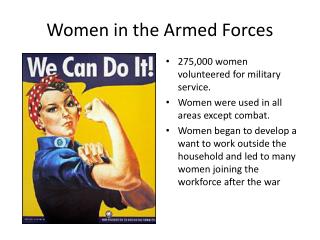 Women in the Armed Forces Women in the Armed Forces. 275,000 women volunteered for military service. Women were used in all areas except combat. Women began to develop a want to work outside the household and led to many women joining the workforce after the war. Join the Women’s Army Corps.

Women in the Armed Forces

The Struggle of the Red Knight with the Dark Forces - . the tsar, the priest and the kulak. never buy in a private shop

The Law of Armed Conflict - . treaties &amp; principles. a brief history of the geneva conventions.