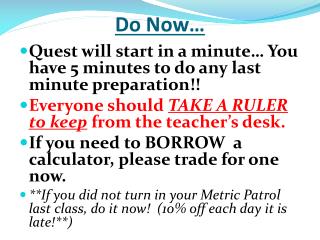 Do Now…. Quest will start in a minute… You have 5 minutes to do any last minute preparation!! Everyone should TAKE A RULER to keep from the teacher’s desk. If you need to BORROW a calculator, please trade for one now.