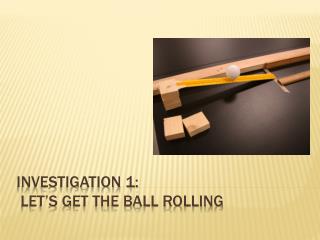 Investigation 1: Let’s Get the Ball Rolling Investigation 1: Let’s Get the Ball Rolling. The higher the release point of the ball on the ramp, the faster the ball will be rolling when it reaches the bottom of the ramp because gravity has more time to PULL it down.

Investigation 1: Let’s Get the Ball Rolling

Acceleration and Force - . engagement. galileo’s investigation. what are the similarities and differences between a

Horizontally Launched Projectiles - . a ball rolling off the table is an excellent example of an object thrown into the

Friction is a force that always acts a. perpendicular to an object's motion. - Galileo found that a ball rolling down one

The batting investigation - . question. which type of bat makes the ball go the farthest distance, composite, easton, or

Controlled chaos - . ef 151, section 1a group 8. step 1: the beginning. the pvc pipe is knocked out from under the tube,

How Energy Gets the Ball Rolling… - . the sun and earth’s spheres. the earth’s is made up of four interconnecting

Rolling Motion of a Rigid Object - . ap physics c mrs. coyle. for pure rolling motion there is “rolling without