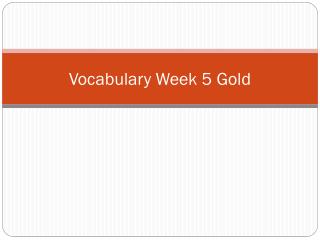 Vocabulary Week 5 Gold. Word 1: Majestic Def: Impressively beautiful Sent: But the majestic river floated on, Out of the mist and hum of that low land Mathew Arnold. California Gold Rush - . 401. starting in 1848, thousands of people began traveling west to search for gold and other

Vocabulary - . week 2. 1) choice. decision made or course of action taken when faced with a set of alternatives. 2)

GOLD MINING IN BROOKFIELD - Introduction. as early as 1851, government and private enterprise encouraged prospectors to

The Algebra of Gold - . by frank j. antoniazzi jr. why study about gold?. gold is valuable. many people buy gold jewelry.

Academic Vocabulary - . carol redmond. my teacher said that the school has tough new standards and i need to improve my